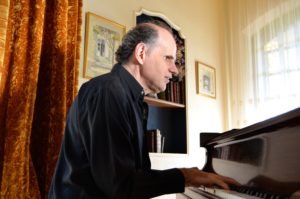 Bernard d’Ascoli was born in the South of France and began learning piano and organ at the age of eleven. In 1974 he was one of the youngest French Baccalaureat graduate of the year and four years later, at the age of nineteen, he won the First Prize in the Barcelona International Piano Competition.

Bernard d’Ascoli first came to major public attention in 1981 when, following his Third Prize in the Leeds International Piano Competition, he made his London debut both in recital and with orchestra and recorded the Liszt sonata and other works for EMI, later re-issued on CD.

He was soon performing in many of the world’s most prestigious venues including Paris, Amsterdam (Concertgebouw), Vienna (Musikverein), Geneva, Brussels, Madrid, Tokyo, Washington and the Sydney Opera House.

He has performed with most London and other British orchestras as well as with many major overseas ensembles such as the Chamber Orchestra of Europe, Boston Symphony, Montreal Symphony, under such prestigious conductors as Svetlanov, Sanderling, Berglund, Plasson, Casadesus, Guschlbauer, Litton, Menuhin, Pritchard, Herbig, Leppard, Fischer, Järvi, Llewellyn and Andrew Davis.

He has participated in prestigious international festivals such as the BBC Proms, Sintra, Oviedo, Besançon or La Roque d’Anthéron. In 2000 he was a special guest of the Sydney Olympic festivities, appearing at the Opera House both as recitalist and soloist with the Sydney Symphony.

More recently he has been the guest of the English Chamber Orchestra and the London Mozart Players conducted by Andrew Parrot, with whom he has toured nationwide including performances at the Queen Elizabeth Hall and St John’s Smith Square.

British venues where he has performed recently include Oxford, Cheltenham, Chichester while abroad he has toured Germany with the Neue Lausitzer Philharmonie and the Süddeutsche Kammersinfonie.

He is founder and Artistic Director of PIANO CANTABILE, an organisation based in France which is dedicated to the coaching and professional support of highly-gifted young pianists.

Bernard d’Ascoli has recorded albums of Chopin and Schumann for Nimbus and has made regular recordings as well as live broadcasts for the BBC. With Linn Records he features prominently on another Schumann CD of the Quintet and other works where he is joined by the Schidlof Quartet. His particular affinity with the music of Chopin led him to undertake the recording of the complete Scherzi and Impromptus and a double album of the complete Nocturnes for the Athene-Minerva label. The latter CD was selected as an “Editor’s Choice” in the “Gramophone” magazine.